The Seventies at NOC

Previously on NOC… the operation is running and so is the river!

After getting the business off the ground in 1972, the Kennedy family moved from Atlanta and put their savings into becoming equal partners with Horace Holden. Aurelia began teaching 1st grade in Andrews, NC, in the Fall of 1973. More boats were purchased, and the first fleet of aluminum canoes was purchased in preparation to increase instruction and rentals.

In March of 1973, the NOC’s first whitewater instructional clinic was conducted at Camp Chattahoochee on the Chattahoochee River near Roswell, Georgia. This would be the first of many camp partnerships. NOC hired two US Olympic Team Kayakers, Louise Holcombe and Carrie Ashton. They played an essential role in getting the instruction program off to a strong start and attracting other Olympic paddlers to work at the NOC. By the end of 1973, NOC had conducted 10 whitewater paddling instructional clinics and 50 three-day courses. By the end of the decade, the paddling fleet had increased to 56 canoes, 30 kayaks, and 103 rafts!

Aside from increasing the focus on instruction, NOC was focused on sustaining guide life on the river. NOC purchased Hellards for staff housing in 1975 after leasing the motor court for over a year. The popularity of the river attracted the whitewater open canoe nationals, held on the at Delabar’s Rock rapids. Staff won many of the slalom events. In 1976, NOC sponsored the first triathlon to be held in the southeast and what is now the longest-running triathlon in the US. It included a mile swim in Fontana Reservoir, a 4-mile run over the Needmore Road Hill, and an 8-mile paddle in a solo open canoe down the Little Tennessee River. This attracted even more competition to the area. In 1977, a vital addition was made to the property. Fort Hammond, the equipment storage area upstream of the motel, was built and named for Drew Hammond, the first full-time manager of the maintenance of vehicles and equipment.

Towards the end of the decade, several new programs were started on the Nantahala, such as raft rentals (sans guides), rock climbing instruction, cross-country skiing trips on the Blue Ridge Parkway, and the first Grand Canyon trip for rafters and kayakers. The NOC staff even began publishing a mail-order catalog as a part of the NOC Newsletter.

On a weekend when races were being held on the Nantahala, a significant flood occurred, and the river rose to 9.5 feet on the old river gauge. A portable toilet rented for the race weekend washed away and must still be at the bottom of Fontana Reservoir. Some staff who lived in the Stone House formed a chain and could steady one another while walking through the thigh-deep water to get to breakfast and work on the river right. Later, when a waitress from River’s End tried to follow them, she was washed downstream by the high water. She spent a terrifying time hanging on to a tree above Big Wesser Falls, the Class V rapid downstream of the NOC until a guest alerted Payson. He was able to rescue her with a throw rope. ~  Excerpt from NOC Stories by Payson Kennedy & Greg Hlavaty

On Labor Day in 1976, the old flume on the Ocoee River was shut down. Water began running regularly in the old riverbed, and paddlers ran the Ocoee regularly. NOC began operating on the Ocoee River, becoming the seventh company to offer trips on the Ocoee. David Brown started coordinating lobbying efforts to ensure regular recreational water releases on the Ocoee after the renovation of the flume was completed.

Many NOC staff competed and placed when the U.S. National Wildwater Kayak Championship races were held on Section IV of the Chattooga in 1973. Shortly after that, Congress designated the Chattooga River a Wild and Scenic River. Housing was secured for the guides working on the Chattooga that summer. The prior two years, they had been camping. As interest in paddlesports began to grow in beautiful upstate South Carolina, the U.S. Forest Service started regulating trips on the Chattooga in 1975. The three outfitters were limited to six rafts, and the number of trips was restricted. It made sense to increase the size of the rafts from four to six-person rafts. The shift to larger rafts decreased the excitement but increased safety and proved advantageous. It provided a better guest-to-guide ratio. Later on, in ‘76, NOC purchased the present Chattooga Outpost property, and Les Bechdel became the Chattooga Outpost manager. Unfortunately, it wasn’t until 1977 that staff began blowing up rafts at the Chattooga with electric blowers, runoff of the truck battery, rather than with foot pumps. (Ha!) 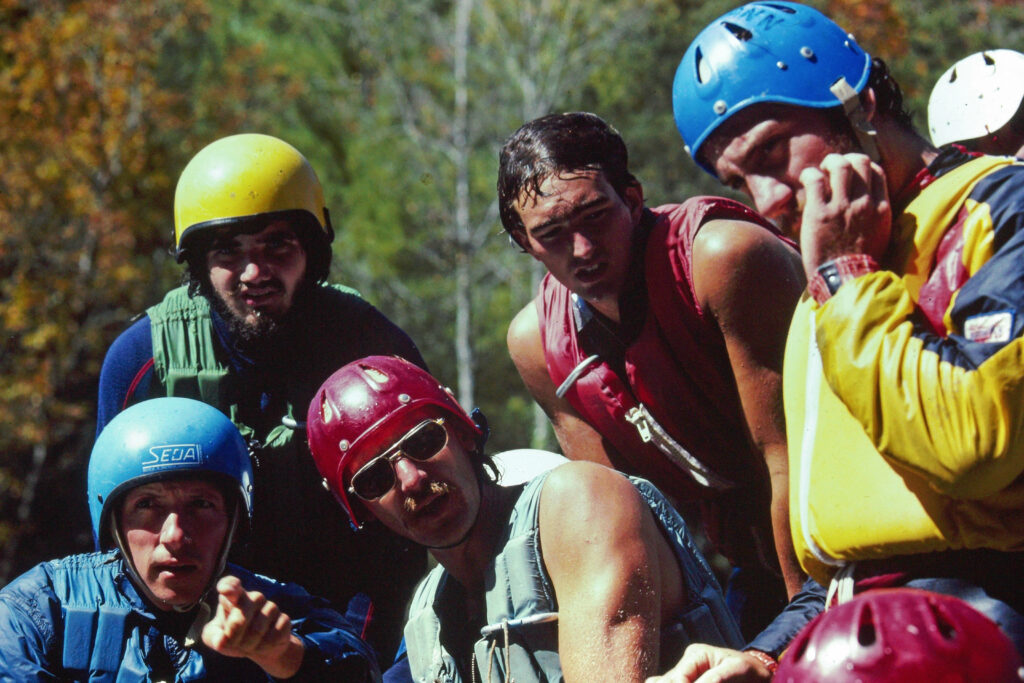 On several high-water days, Section IV of the Chattooga was too dangerous, and instead, guests were offered a chance to raft the Upper Nantahala at flood stage. On the first of these trips, when the rafts filled with water, guides found that most eddies were too small to stop for bailing or dumping the rafts. They paddled pretty much out of control and without stopping until reaching the powerhouse where they could eddy out. On subsequent trips, guides first ran a fast trip on the lower river to train crews before lunch and then ran the upper in the afternoon. They’d also learned the locations of a few eddies where it was possible to stop and empty the rafts.~  Excerpt from NOC Stories by Payson Kennedy & Greg Hlavaty

In early 1972, the world was looking forward to the 11th Winter Olympics in Japan. Richard Nixon was preparing to run for his second term...
Live Chat